Chill out in Perth or mellow out in Melbourne? The east and west coasts of Australia both have much to offer, but differ greatly in atmosphere, climate and scenery.

If you are thinking of relocating to Australia you should think quite carefully about what you want from life, and whether the options on the west or east coast might suit your circumstances better. You could of course, if you have the time, take a road trip across this massive country. It is vast. Anyone moving from the UK, where 200 miles is viewed as an epic journey, would do well to bear in mind the differences in climate and time zones between the two sides of the Australian continent.

Thanks to the number of cities located on the Pacific Ocean, the east has better infrastructure and communications. Brisbane, Melbourne and Sydney are all located here. If you’re a stranger to Australia you’ll find it easier to rent cars, access work opportunities and enjoy many of the recognisable benefits of a major city on the east coast. Those in pursuit of sun, sea and pleasure will love the area around Brisbane known as ‘The Gold Coast.’ The trip from Fraser Island to Cairns, in Australia’s tropical north, will put you more in touch with nature.

You can take in the Great Barrier Reef, or just spend some time island hopping the 20 tropical islands in the Pacific. Even if you’re only thinking of visiting Australia as a tourist, this spectacular region is truly awe-inspiring.

Perth is often described as ‘Australia’s most remote major city”, though this urban centre is very popular with migrating Brits for work and housing opportunities. One definite plus is the proximity of one of Australia’s wine growing regions to Perth; the east coast is home to many major vineyards. Another plus is that a staggering 19 beaches surround Perth.

The west coast is generally less populated than the eastern side. If you want to explore the outback and enjoy a truly authentic experience, then this is the region for you. Alternatively if you want to escape humanity, make your way to the Ningaloo Reef, a world heritage site, and enjoy swimming with sharks and numerous other marine activities.

Wherever you choose to settle in Australia, this young and vibrant country is full of opportunities and life-changing experiences for everyone. 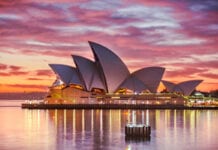